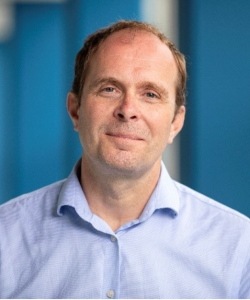 Marc Koper is Professor of Surface Chemistry and Catalysis at Leiden University, The Netherlands. He received his PhD degree (1994) from Utrecht University (The Netherlands) with a thesis on nonlinear dynamics and oscillations in electrochemistry. He was an EU Marie Curie postdoctoral fellow at the University of Ulm (Germany) and a Fellow of Royal Netherlands Academy of Arts and Sciences (KNAW) at Eindhoven University of Technology, before moving to Leiden University in 2005. His research in Leiden focuses on fundamental aspects of electrocatalysis, theoretical and computational electrochemistry, and electrochemical surface science, in relation to renewable energy and chemistry. He has received various national and international awards, among which the Spinoza Prize from the Dutch Research Council (2021), the Allen J. Bard for Electrochemical Science of The Electrochemical Society (2020), the Netherlands Catalysis and Chemistry Award (2019), and the Faraday Medal (2017) from the Royal Society of Chemistry. He is currently President of the International Society of Electrochemistry.