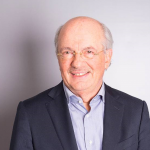 Emmo Meijer (1951) is the chair of ChemistryNL (top sector chemistry). He studied chemistry in Amsterdam (Free University), where he obtained his doctorate in 1979. He then worked at DSM in various positions in research and business management, where he finally became DSM Research Director and  the first Chief Technology Officer. He then worked as Senior Vice-President R&D for Unilever and Corporate R&D director for FrieslandCampina. During his industrial career he was also parttime professor at the Eindhoven University of Technology. He is currently active as member of the Executive Board of the KU Leuven and chairperson of the EIT Raw Materials in Berlin. He fulfilled and is still fulfilling many positions in the public and private domain where it is about research and innovation being member of advisory councils and supervisory boards. Emmo Meijer is widely acknowledged for building bridges between science, industry and politics at all stages of his career.