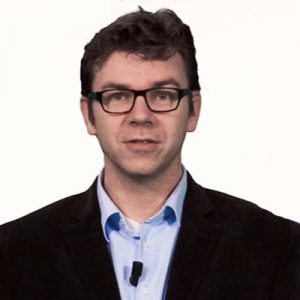 Guido Mul received his PhD in 1997 from the Delft University of Technology, The Netherlands, on the in situ DRIFT analysis of catalytic oxidation of (diesel) soot. After a Post-Doc position at SRI-International (Stanford Research Institute) in California, USA (1997-1999), he was awarded a fellowship of the KNAW (Royal Netherlands Academy of Arts and Sciences) to investigate the mechanism and kinetics of heterogeneously catalyzed hydrocarbon oxidation reactions at the Delft University of Technology, using a combination of transient (spectroscopic) methodologies. He was awarded a VIDI scholarship and appointed associate professor in 2007, to further develop and evaluate spectroscopies (ATR, Raman) for analysis of liquid phase (photo)catalytic processes.

He was appointed full professor to conduct research in the field of ‘Photocatalytic Synthesis’ at the University of Twente in 2009. Prof. Dr. Guido Mul is a leading scientist in development of (photo)electrodes and photocatalysts for industrial and environmental applications by combining performance evaluation with state-of-the-art spectroscopy, and now published over 200 peer-reviewed papers, receiving more than 1000 citations per year. He has been PI in several EU programs on renewable energy driven (photo- and electro-)catalysis, is a member of the ECCM (Electrochemical Conversion and Materials) advisory committee, a member of CBBC, and presently intensively cooperates with industry in various Public-Private, and NWO-funded projects to develop sustainable, energy-efficient and economically feasible (photo) electrochemical processes.